The FLIR C3 thermal imaging camera is one of the newest products released by FLIR Systems that promises to be a hit in the industrial professional world. It is a pocket-friendly, robust, and easy-to-use camera that comes with a range of advanced features useful for finding potential problems in the field.

Leaks and energy loss in buildings, hot spots in switchboards, pests problems moisture problems and electrical and mechanical faults – all of these can be found with a FLIR C3 thermal imaging camera. The information obtained can then, through wireless connectivity, be transferred to iOS and Android devices, to create a report right in the field. This WiFi functionality is actually the most exciting feature of this thermal camera. 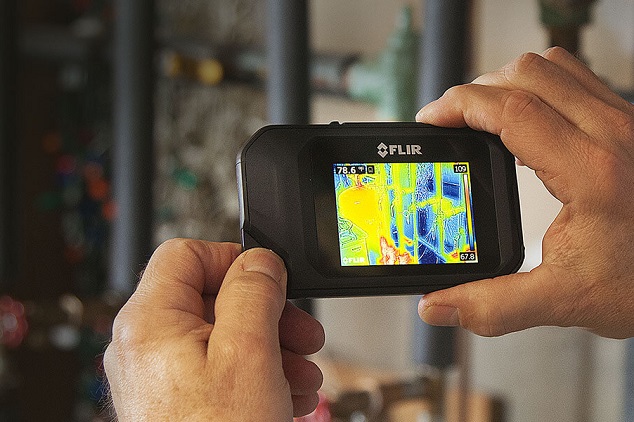 Having a thermal camera with WiFi feature allows for various useful functions. For example, if you want to stream results to another person or have another team member that will be inspecting a specific area and want to see his results in real time with him, the FLIR C3 thermal imaging camera will allow you to do this with no problem, reducing the time otherwise wasted when working as a team. Simply put, the FLIR C3 increases efficiency and maximizes clarity on the job site.

To keep the design of this camera simple and compacted, FLIR used a brilliant 3” intuitive touchscreen, similar to touchscreens of smartphones or tablets, that allows all menus and main functions to be accessed right on the screen.

While the image resolution of this camera is not something tremendous, compared to the amount of resolution by current standards, the 4800 pixels image it provides is adequate for many close-range applications. The camera also features a second camera that captures available visible light. Both images are then combined and a new image is created (a process that FLIR calls MSX) with a much better quality. The FLIR C3 captures temperature oscillation as small as 0.1 °C and can detect and measure temperatures from -10 to 150 °C. A spotmeter will show which part of the image is hottest or coldest, helping you obtain fast diagnosis of thermal anomalies.

A nice galvanized rubber coating makes this camera a real industrial professional tool that holds up in the field. The FLIR C3 is tough enough to be carried in a tool bag or belt and can take up to 1.80m drop with no problems. This doesn’t mean you can throw it around, but accidental drops, bumps and scrapes are fully accounted for in the design.

Way Beyond Just Good: Testo Products Are All-In-One Solution Measuring gauges and instruments have been improved upon since the middle of the 20th century. ...

Sanders: Sand Your Way to Smooth Finishes on Wood From gardening knives to double-sided tapes there is a number of tools that can help make your ...

Outdoor Workwear: Ways to Dress for the Harsh Australian Conditions If you wear your regular clothes to do some outdoor work, soon you’ll be left with nothing pres ...