HomeOffice EquipmentThe Ways in Which Sit-Stand Desks Benefit Your Hea ...
Posted by: Roy Jenkinson, May 8, 2020 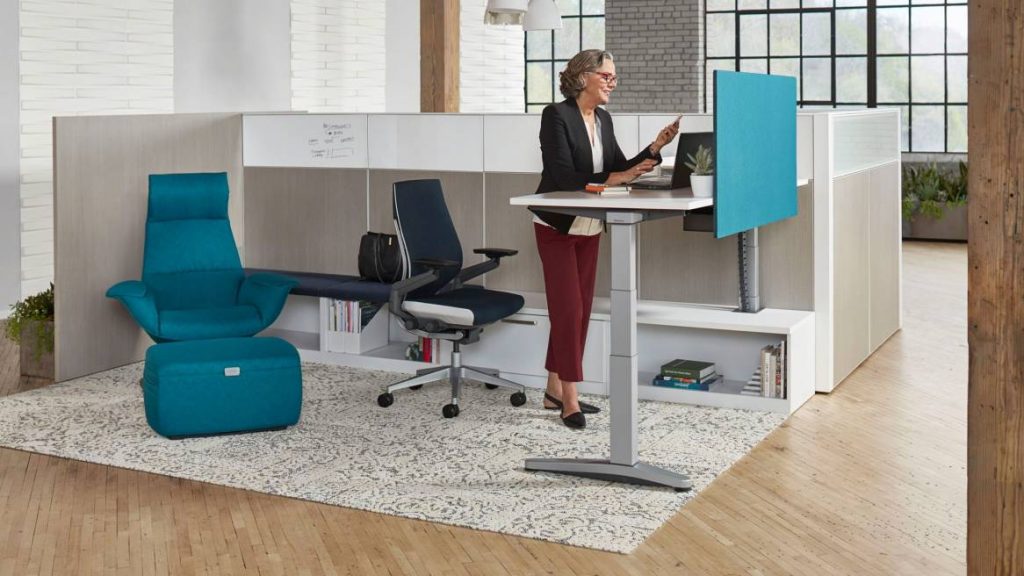 Standing desks, also known as sit and stand desks are basically pieces of furniture that let you stand up comfortably while working. Most modern sit stand desk versions are height adjustable and you can alternate between standing and sitting. They provide a couple of benefits for your health and thus increase productivity and help fight against the negative consequences of sitting too much. That being said, here are some ways that a stand up sit down desk can benefit your health. 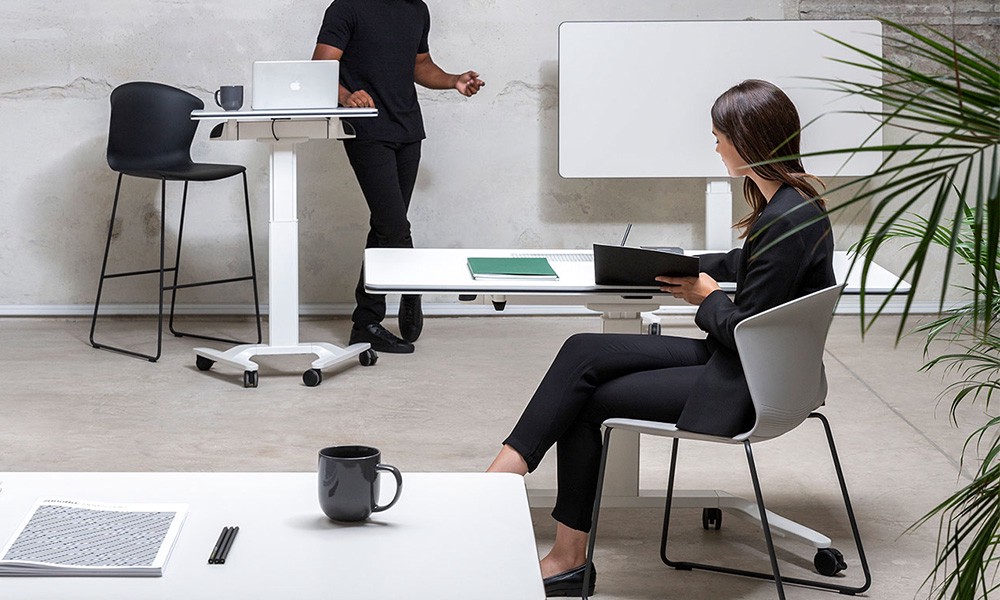 Weight gain is the result of consuming more calories than spending. Conversely, spending more calories than consuming will ultimately result in weight loss. Exercising is the best way to burn calories quickly, but standing instead of sitting can also be beneficial. When compared to spending an afternoon sitting, standing up has shown to burn as much as 200 calories. That’s about 1000 calories burned each week just by standing instead of sitting at your desk every day. This caloric difference can be one of the main reasons why sitting longer is tightly linked to metabolic disease and obesity. 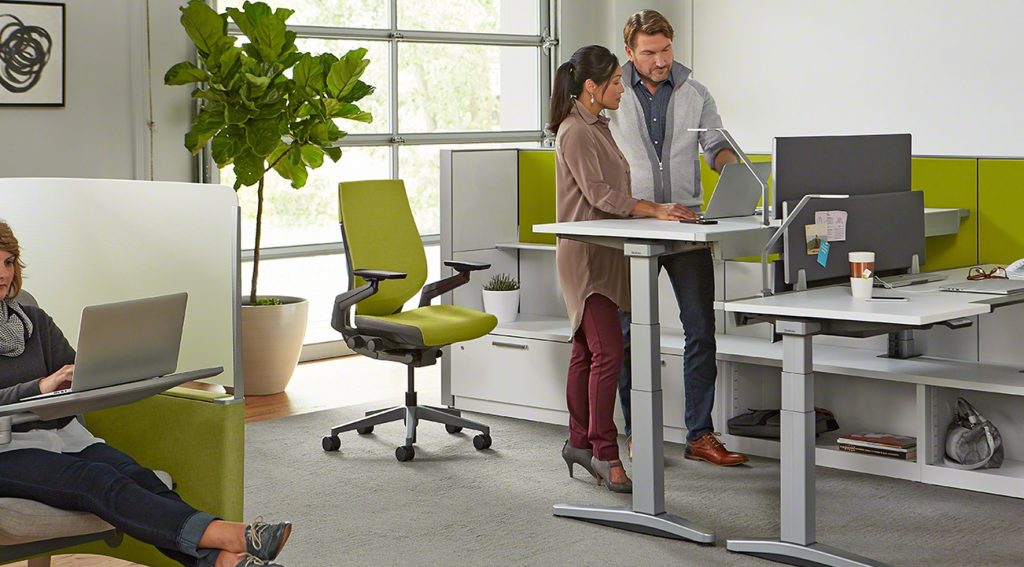 Typically, the more your blood sugar level is increased after a meal, the worse it’s going to be for your health. This is especially true for people with type 2 diabetes or insulin resistance. Standing for 2 to 3 hours after lunch can reduce this blood sugar spike by 40-50% compared to those who sit for the same amount of time. All that without doing any other physical movements around the office. In fact, standing for just 30 minutes throughout your workday can reduce blood sugar spike by 10% on average. The negative effects of sitting down right after a meal are considered to add an astounding 110% risk to developing type 2 diabetes. 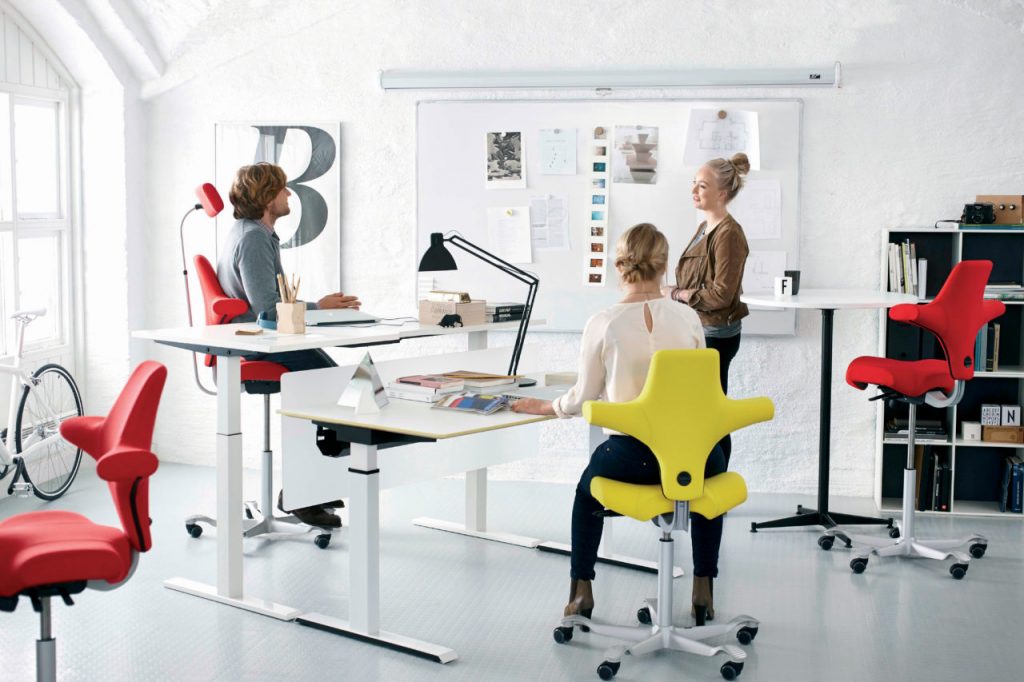 The notion that standing is better for the health of your heart was proposed all the way back in 1953. A study found that bus drivers had twice the risk of heart disease-related deaths than bus conductors who stood throughout the day. And now that we have a much better understanding of the negative effects that sitting has on your heart’s health, it’s estimated that prolonged sedentary hours increase the risk of heart disease for as much as 150%. In fact, sitting for long hours has negative effects that not even intense exercise can make up for. 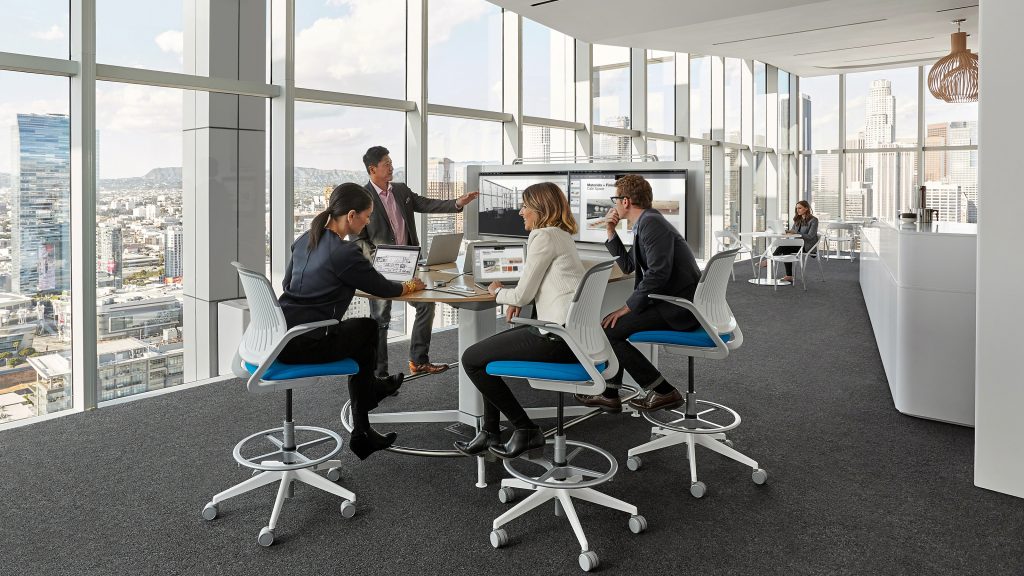 Back pain is one of the worst enemies of office workers. Numerous studies have shown that using a stand up sit down desk for a couple of weeks can help improve lower back pain by 30% and neck and upper back pain by 50%. Switching back to using regular desks has shown to reverse these positive effects in just a few weeks. 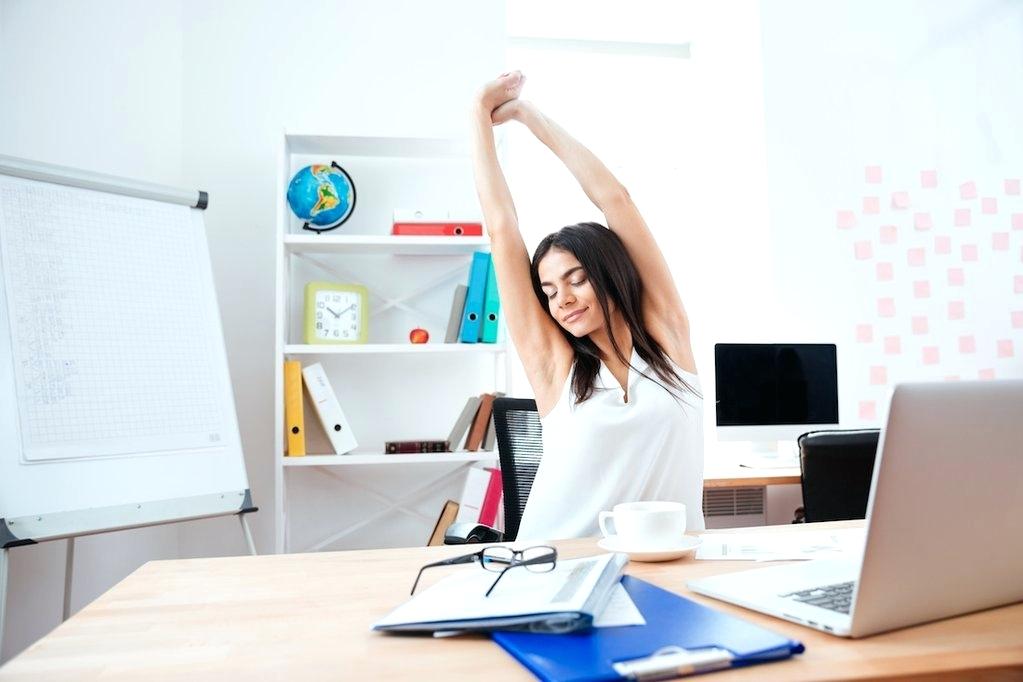 Sit-stand desks have a positive effect on your overall well being. People using them report less stress and fatigue than those who sit throughout their entire workday. Further, most people who use them claim to have increased energy and vigour. Many users have reported that their overall mood and energy has reverted to the original levels after they’ve switched to using their old desks. Again, all of this just confirms that the sedentary lifestyle has negative effects on a person’s mental health, increasing the risk of developing anxiety and depression. 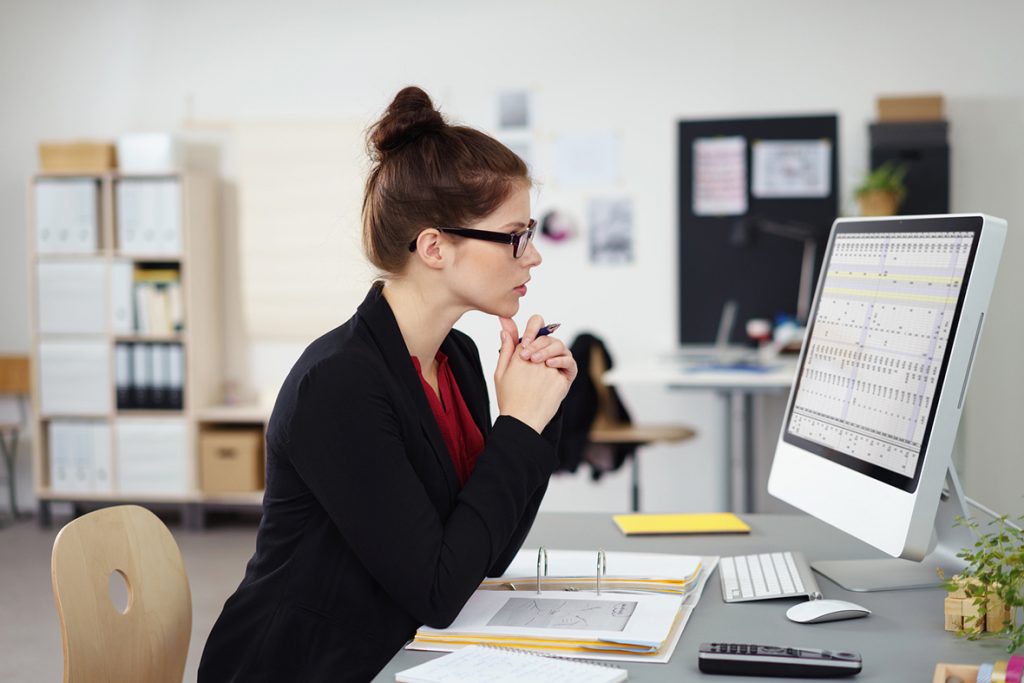 Many people are concerned that standing desks can negatively impact certain daily tasks like typing. While standing and working may need some getting used to, they won’t affect your typical work tasks. A study involving young office workers who used a standing desk half their workday showed that there weren’t any dramatic changes in the number of typing errors or characters typed per minute. So when you consider that standing improves energy and mood, using a standing desk has higher chances of boosting your productivity rather than hindering it.

Standing Can Help You Live Longer 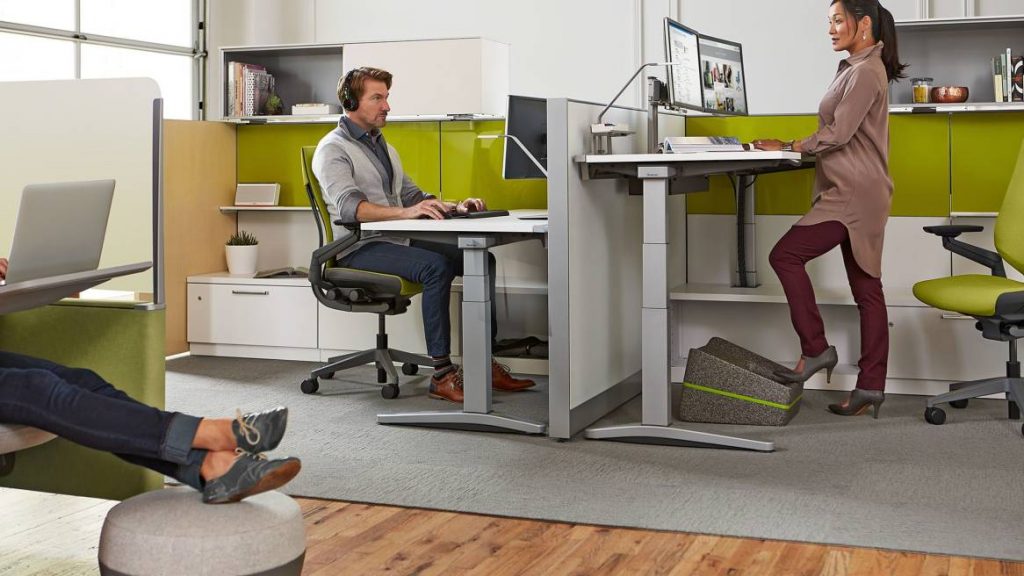 Numerous studies tightly relate sedentary lifestyle to early death. And that isn’t surprising when you consider the links between heart disease, type 2 diabetes and sedentary life. Those who sit most of their workday have a 50% greater risk of dying earlier than those who spend most of their workday standing. Another study has shown that reducing the sitting time to less than 3 hours a day can raise the average life expectancy by 2 years. While all of these studies don’t prove cause and effect, the evidence indicates that standing more can often lead to a longer lifespan.

The Ways The Electric Sit Stand Desks Improve Office Work Yes, when one thinks of a workplace where injuries happen, the office doesn’t usually com ...

3 Ways To Keep Your Spine Neutral And Healthy When the spine is in its neutral posture, our bodies are in the strongest and most injury-resis ...

How to Select the Right Work Desk Contents1 1. Its purpose2 2. Ergonomics and space3 3. Quality and durability The feng-shui phil ...

Ways to Recognize Ergonomic Risk Factors in the Office In order to prevent ergonomic risks in the workplace, many company owners have turned to innova ...