HomeServicesElm Leaf Beetles & Ways to Ward Them Off
Posted by: Tiana Utley, January 14, 2021

Elm leaf beetle (Xanthogaleruca luteola) is a leaf-chewing pest that attacks elm trees. It was introduced from Europe to Australia in 1989 and today it’s one of the greatest threats to the health and wellbeing of the elm tree population in South-Eastern Australia and the ACT.

Every year, from November till the end of February many homeowners in Canberra and the region discover elm leaf beetle infestations in their trees which can be very disappointing. If you don’t start with treatment on time, these annoying pests can defoliate the entire tree in just a week. So, as soon as you notice tiny little holes on the leaves, you should immediately start with an effective elm beetle treatment. 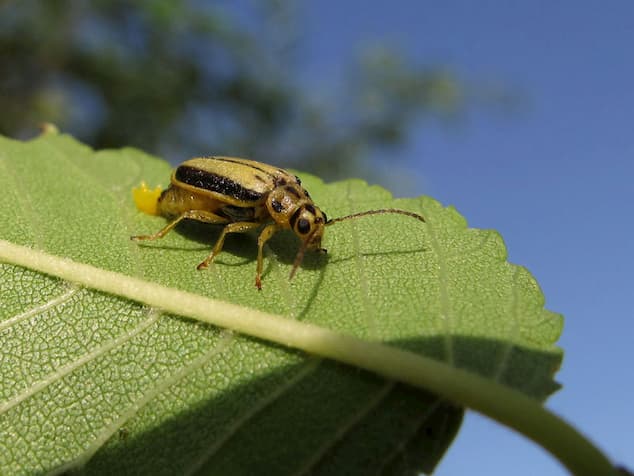 There are four stages of elm leaf beetle development: egg, larva, pupa, and adult. Usually, adults hibernate over the winter in dry sheltered places such as woodpiles, bark crevices or buildings. As spring comes and temperatures rise, they fly to elm foliage in order to chew leaves and lay eggs. But how can you be sure that the insect you see is the actual beetle?

It’s simple. Adult beetles are usually 6-8mm long, varying between yellow and olive-green colouring, with black, longitudinal stripes along the centre and the margins of the back. As the season advances, the females start laying yellowish eggs in a double row of about 5 to 25 on the underside of the leaves, approximately the size of a sesame seed. Before hatching, eggs become greyish and depending on the temperature, hatching can begin in 7-10 days.

Anyway, eggs hatch into larvae that develop through 3 growth stages over a period of several weeks which is considered to be the most threatening period for the life of the tree. So, shortly after being hatched they are black and resemble caterpillars. After feeding, they become yellowish to green with rows of tiny dark tubercles and during the third growth stage they grow up to 7mm long and have black tubercles down their sides that resemble two black stripes.

The most severe damage caused by the elm leaf beetle happens mainly during the larval stages. That is why, it is very important to look for an experienced and reliable tree service company that can correctly identify the larvae, and if needed, offer an appropriate elm beetle treatment to save your tree. 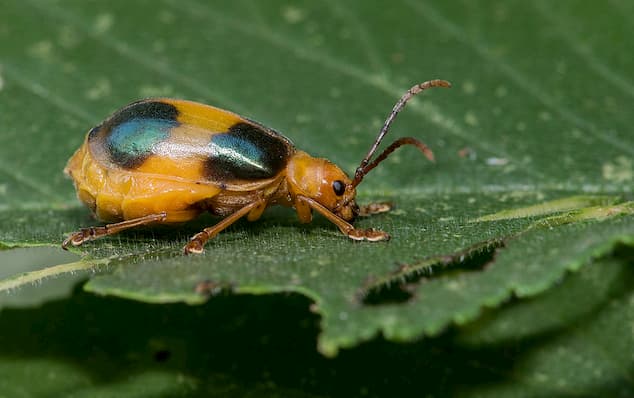 The larvae can skeletonise the leaves and destroy the tree’s ability to achieve photosynthesis and produce reserves of energy necessary for growth, disease resistance and vigour. Adults also damage the foliage by chewing entirely through the leaves, often in a “shothole” pattern. Anyway, this damage continues through the growing season, causing damaged foliage to turn brown to whitish.

So, as I mentioned before, elm leaf beetles can entirely defoliate large elm trees, which can have a negative impact on the environment and the aesthetic value of the landscape. Moreover, if repeated, extensive defoliation can cause the tree to decline. So, after the larvae have fed on the green tissue of the underside of the leaf, they crawl down the trunk and pupate in bark cracks or around the base of the tree. When pupas emerge as adult beetles, they return to the foliage and continue the cycle of destruction.

Furthermore, since adult beetles travel quickly by flying, they can easily move from tree to tree feeding and laying eggs which can cause defoliation within a short period of time (in some cases within a week). What’s worse, as temperatures increase, the metabolism of the beetle increases too and that is why it is essential to take elm beetle control in your hands as soon as possible. 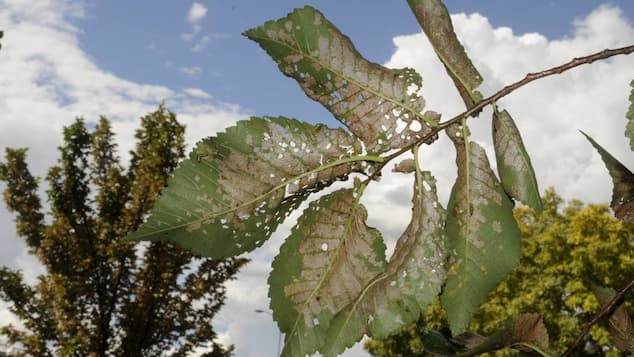 Before starting with any king of treatment it is advisable to consult professional arborists that can help out by inspecting your trees and shrubs, diagnosing the problem and recommending the best elm leaf beetle treatment. There are several methods and products found to be the most effective in preventing and stopping the spread of an elm beetle infestation.

Trunk injection with Imidacloprid is considered to be one of the most effective and environmentally friendly options to ward off beetles. The insecticide is injected directly into the trunk of the tree and can protect it against damage and defoliation for two or more years. After the injection, the tree transports the chemical to the leaves, killing the beetles that are feeding on them. This is the most environmentally-friendly method known, and it’s safe for children and pets too.

Canopy foliar sprays are implemented around the third week of October as a preventative measure. Usually, they need to be applied twice a year, but it depends on the size of the tree. That being said, trees up to 30m in height can be treated with one application that can provide protection for one whole growing season. On the other hand, if the tree is older, these kinds of sprays may not be practical and you should try with another method. 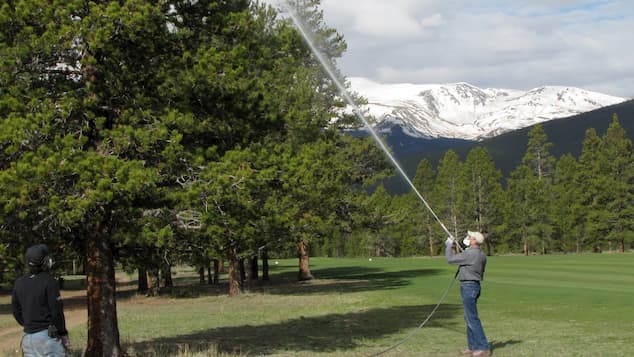 This is a safe non-chemical and environmentally safe control measure that is used to trap larvae while descending down the trunk between December and early February. It includes using an adhesive tape that can be wrapped around the trunk (with the sticky side facing out) in a strip, about 20cm wide. This should break the beetles’ lifecycle.

Remember to apply the tape before larvae start crawling down the trunk. So, to be entirely sure when that would happen, you need to monitor beetles very closely because the time to crawl down can vary depending on the weather each season. Anyway, if beetle numbers are high, you may need to repeat the banding method several times each season.

When Is the Best Time to Treat Elm Trees?

The best time to treat elm trees is just before they come into leaf. Even though stem injection can be done any type of the year, it is recommended to be done before the beetles have laid their eggs or just after the eggs hatch.

Landscaping as Part of the Curb Appeal: The Ways Professional Arborists Help Out Wanting to add value to your home, regardless of whether you intend to sell it or not, has grea ...

Starting a Window Washing Business: Some Important Things to Consider Starting your own window washing business is not a bad idea in a large urban centre such as Syd ...

Ways to Make Way for Organisation When Moving and Say Goodbye to Stress If there’s one noun that can be singled out to represent the people of today, it’s got to be st ...

Ways To Ease Your Job With Diploma In Project Management Project management is the art of taking uncertainty and transforming it into certainty. For som ...